[Architect VILEN KÜNNAPU]
Professor Vilen Künnapu is one of the most important Estonian architects of the last three decades, and he was among the first postmodernist theoreticians and architects in the 1970s. During his studies, Künnapu was part of a cross-sectional Soup 69 group whose work combined spirituality, pop art and technological futurism. Since the 1970s, Künnapu has developed postmodern architectural theories and, for example, Soviet-socialist collective spaces in the postmodern style. His recent work has been described as energy-centre architecture, in which postmodern aesthetics are combined with religious mysticism. His recent work includes Tigutorn (“the snail tower”) in Tartu and the science center Ahhaa to be built next to it.

[Architect TUOMO SIITONEN]
Tuomo Siitonen Architects is an established practice with a wide-ranging portfolio of projects comprising numerous major public buildings, office buildings, prize-winning housing projects as well as renovations of protected heritage sites. Examples include the Helsinki District Court, the Varma Mutual Pension Insurance Company Headquarters in the Helsinki district of Salmisaari, the annex of the Finnish Embassy in Moscow, the city libraries of Joensuu and Porvoo, Hämeenlinna police headquarters, Nokia’s R&D facilities in the Helsinki district of Ruoholahti and Open Innovation House on the Otaniemi campus of Aalto University. Siitonen has submitted over 50 prize-winning entries in national and international architectural competitions, and he has greatly contributed to the education of future generations of architects as a former professor of architecture at the Helsinki University of Technology (today Aalto University) from 1993 to 2006. Contrary to standard practice, Siitonen has been awarded the State Prize for Architecture not once, but twice: in 1983 and 2009.

The event is part of the Helsinki Design Week Design Diplomacy discussion series, which open the doors to Helsinki-based ambassadors’ residences.
See the participating embassies and their schedules here: https://www.helsinkidesignweek.com/events/design-diplomacy-2018/ 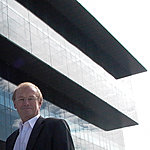